Lifting a car onto the roof of a three-story building is not a site one sees every day, but this is just what passersby were treated to in Gqeberha recently. The lift and placing of the vehicle on the top of the building were all in a day’s work for the team at Crane Aid Port Elizabeth.

According to Jacques Scheepers, Crane Aid PE Branch Manager, the company was approached by Red Bull to place one of their trademark Mini Coopers on top of a building for an event in the city.

Not one to shy from a challenge, the team were quick to agree and in February the lift – and de-lift – was concluded, because what goes up, must come down after all.

“The events planner wanted the car to be on display at the event that was taking place at a rooftop venue in Gqeberha,” said Scheepers. “We placed the car the day before the event and removed it successfully the day after the function.”

He said the Crane Aid PE branch including technical supervisor Johan Els and Nico Scriven, Salsa Pestana, Damian Alexander, Xolisa Galada and Louis Richards, all technicians and assistants, were excited to be part of the project.

“What makes this project important is that it is a testament of the dedication and skill of Crane Aid and Morris when approached with a task,” explained Scheepers. “It also showcases the eagerness and willingness of all the branches and head office to take on any challenge and deliver success no matter what we take upon ourselves.”

Taking on the challenge

Showcasing the capability of Morris was part and parcel of the project, said Scheepers, indicating that there was no hesitance on the team side when first approached. “We knew that we could safely and securely do this and immediately set out to make sure we were able to meet the client’s requirements.”

According to Scheepers, a platform for the car to be strapped down on was required to lift the car without any danger of it falling.

“The job started with designing and building this platform at our branch in Gqeberha. Secondly, we designed and built a spreader bar to ensure that the lifting tackle that was used to lift the car did not damage the vehicle.”

For the actual lift, the team used a 50 Ton mobile crane that could easily handle the height and reach of the job.

According to Scheepers, it took about two hours to get the car on top of the building. This included the site establishment, rigging and off-loading.

“It took us about two hours to remove the vehicle from the roof the day after the event took place.”

According to Scheepers, this was not considered a particularly difficult lift by anyone in the team considering they do similar lifts quite often as the team installs quite a lot of OHC builds although, he does, acknowledge that placing cars on roofs in itself is not that common a request.

The biggest challenge with this particular lift, he said, was the famous Gqeberha wind. “The wind factor can always be a challenge and this being an outside lift we had to consider it. Secondly, our priority at all times was to ensure the safety of all the personnel involved and the bystanders.”

The team also had to ensure that there was no damage to the Red Bull vehicle and that it arrived back on the road in the same condition it went up as.

“Our technical team did an outstanding job and we are very proud to say we achieved all our objectives. No one was injured and the car was not damaged. The skills diversity of the technical staff at the PE Branch was a contributing factor in this.”

Scheepers said the team’s vast knowledge of the industry, experience in a wide range of fields, dedication to succeeding at all costs as well as being leaders in the field of lifting equipment and lifting needs was showcased during the project. “As a company, we are also focused on growing our people through continuous training and exposing them to jobs where they can showcase their ability. Furthermore, promoting our people within the company to ensure that skills are not lost does set us apart and give us a competitive advantage.” 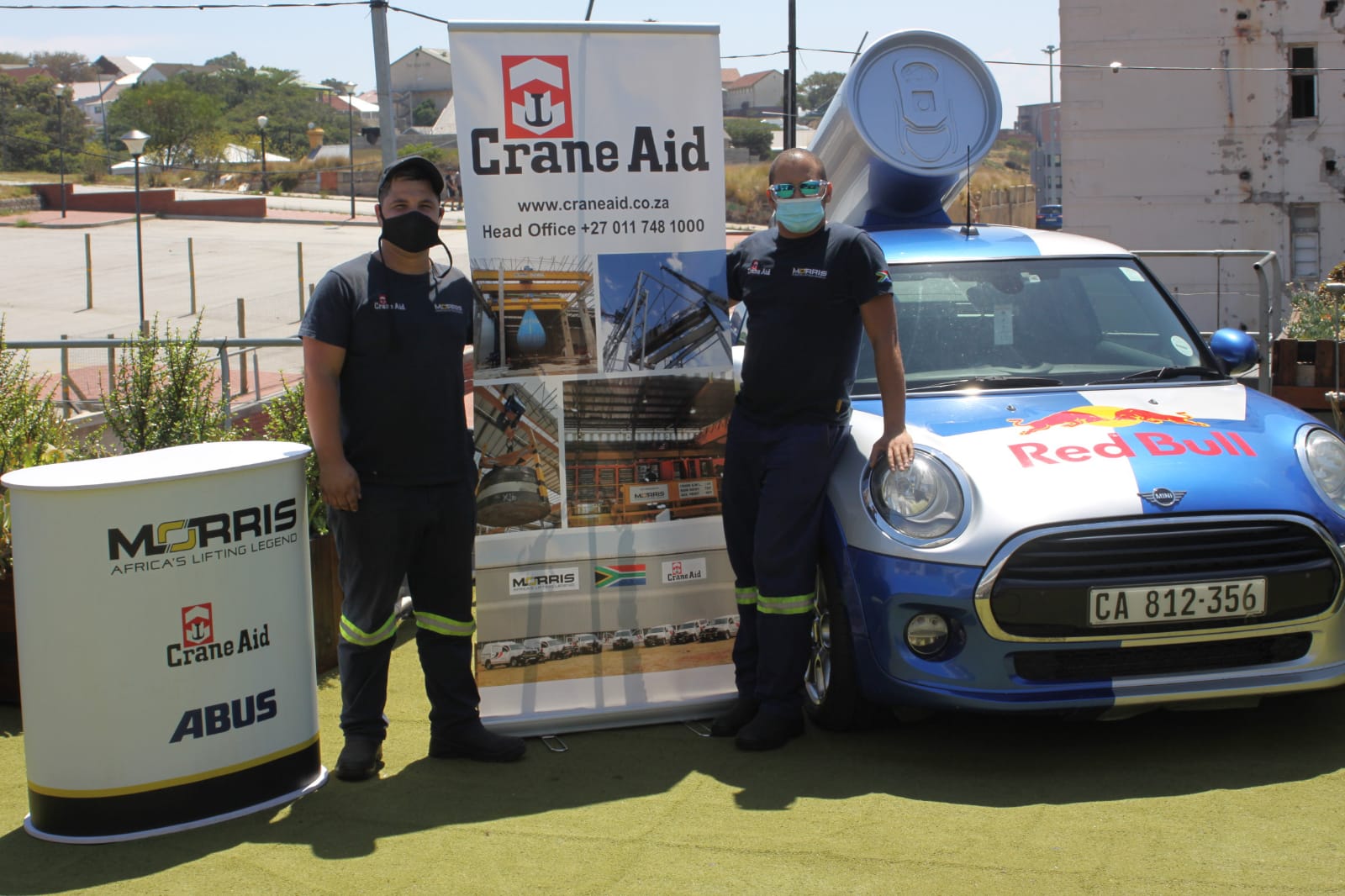 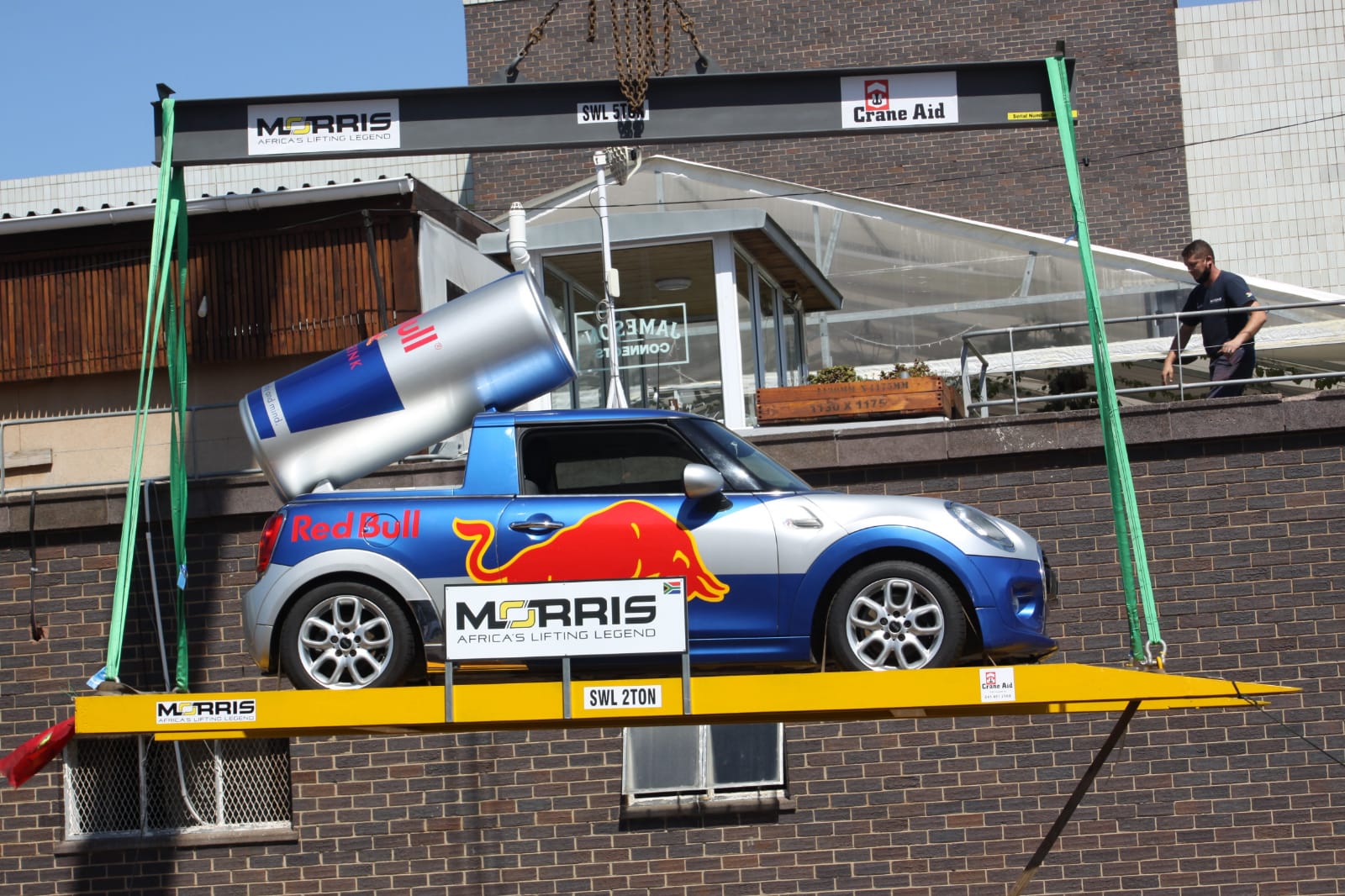 11 Morris / ABUS overhead cranes supplied and installed at Africa Steel and Tube
Manage Cookie Consent
We use cookies to ensure that we give you the best experience on our website. Are you happy for us to use cookies? Read more in our
Manage options Manage services Manage vendors Read more about these purposes
Preferences
{title} {title} {title}